One of the most interesting things to see in Vietnam is a local festival that showcases the identity and culture of the country. Have fun with local people, and learn about the fantastically ritual legends, and unique culture of the ethnic groups that have contributed to shaping an amazing Vietnam by participating in the festival celebration during your trip. As an experienced and passionate tour operator in Vietnam, Aurora Travel recommends the following festivals to be combined with a plan for your upcoming Vietnam tour. 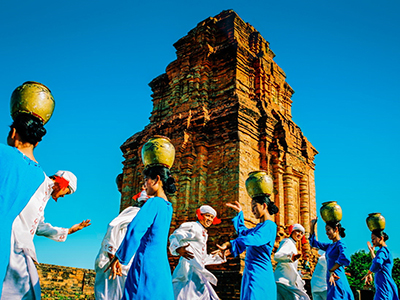 Ninh Thuan Kate Festival
24 - 25 October 2022
Kate Festival was invented by the Cham people and is held in a large space in the three Champa Towers: Po Klong Garai (Phan Rang City)  and Po Rome (Ninh Phuoc town). Local Cham people in traditional costumes gather, performing traditional dances and songs. Good opportunity for the visitors to explore the beauty in the Cham culture, from architecture to costumes, instruments, and traditional songs. 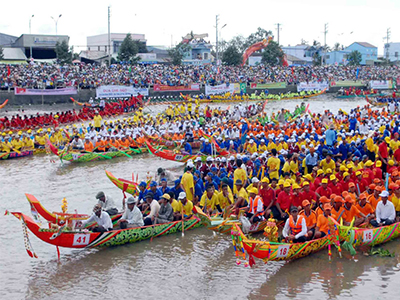 Mekong Delta Ok Om Bok Festival Or Moon Worship Festival
05 - 08 November 2022
Celebrated traditionally and annually by Khmer ethnic people to honor the Moon for protecting their crops, regulating the weather, and blessing them with fruitful crops and prosperity. Held mostly in some provinces of Mekong Delta where the  Khmer community has been residing. Ngo Boat Race, one of the most attractive activities of the Khmer Full Moon Ceremony: Khmer people in front of the communal pagoda or their houses and prepare a special feast with green rice flakes, ripe bananas, fresh peeled coconuts, and mangoes to offer to the Moon God. 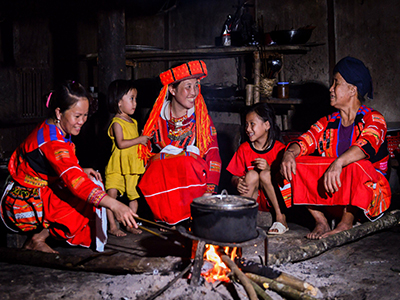 New Year Celebration Of The H'mong People
23 - 25 December 2022
This is the most important Tet celebration for H’mong people, they make thorough preparations ahead of Tet with every family member being assigned a specific task: women make new clothes for all family members to wear during Tet while men slaughter pigs and chickens for the New Year’s feasts. When the rooster crows, signaling the start of a new day, the men are the first ones to get up and do housework. Here visitors can see H’mong people in colorful costumes gather, perform the traditional dances and songs, and experience a traditional home-hosted meal with the local H'mong family. 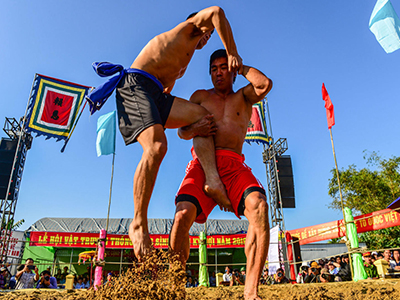 Sinh Village Wrestling Festival In Hue
31 January 2023 (The 10th Day Of The First Lunar Month)
Originating for over 500 years, the wrestling festival aims to maintain, promote traditional martial art to international friends, and emphasize the chivalry of Vietnamese people. Sinh Village is home to shipyards, naval infantry training schools to fight against the invaders and protect the country. The wrestling festival is a traditional ritual held by the village communal house. The wrestling event has taken place on 0.5ha of land in the center of the village wrestlers competed in pairs in two categories: adolescents (under 15 years old) and youth (over 16 years old). 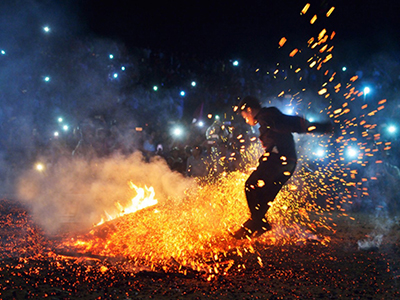 Fire Dance Festival Of Pa Then People In Tuyen Quang
05 - 06 February 2023 (The 15th And 16th Day Of The First Lunar Month)
Unique cultural activity of Pa Then ethnic group, representing the fabulous strength of the human. According to Pa Then’s culture, fire dance symbolizes prosperity and happiness. Held in Hong Quang commune which is home to 150 households with approx 700 people. Dancers in traditional costumes bend their bodies and jump on burning charcoals without any hesitation, dance on live coals with their bare feet, and sometimes they even put the coal into their mouths. 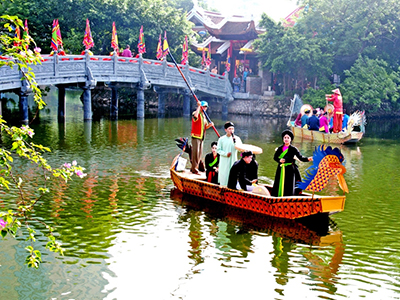 Lim Festival In Bac Ninh
03 - 05 February 2023 (From The 13th To The 15th Day Of The First Lunar Month)
Stretching back over 500 years and recently recognized by UNESCO as part of humanity’s intangible heritage, “Quan Ho” singing plays an important role in the daily life of the local people in the Red River Delta Region. Visitors will have a chance to enjoy skillful dialogue performances between “lien anh” and “lien chi” (male and female Quan Ho singers). The festival is take place in various stages such as pagodas’ yards, the communal house’ yards, on the hills, even on boats gently rowed along the river, or elsewhere. Lim festival also provides other traditional games and entertainment, contests, fairs and cultural activities such as human chess, water puppetry, lion dances, swinging, wrestling, cock-fighting, and more… 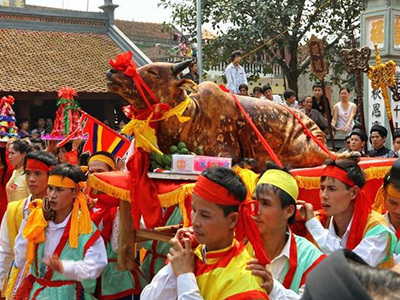 Tho Ha Village Festival In Bac Giang
11-12  February 2023 (From The 20th To The 22nd Day Of The First Lunar Month)
Held annually over three days, from the 20th to the 22nd of the first lunar month. The major day of the festival falls on the 21st. Tho Ha is considered the “sacred land” fulfilled by traditional communal houses, temples, pagodas, and festivals. The village is decorated and lively during the festival, a wooden gate is erected as a custom that has existed since the Ly Dynasty (1010-1225). This event is well-organized by local people who play the role of mandarin wearing a gown and long beard, or the role of the soldiers wearing red shirts, red hats, and yellow leggings and holding an imperial lance. Unique activities include boat races and duck-catching competitions.

Hanoi - Bat Trang Village Festival
05-07 March 2023 (From The 14thto The 16th Day Of The Second Lunar Month)
Held annually at the full moon of the second lunar month to honor the significance of traditional pottery and remind the descendants to remember their ancestors. The festival is also an opportunity for the local people to express their gratitude to God, wishing for richness, social civilization, and peacefulness. The event contains traditional ceremonies/rituals such as water procession, plaque bathing, ancestral tablet washing, and a contest of composing Ca Tru songs to sing at the worshipping ceremony. 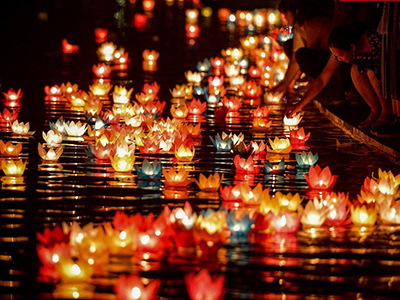 Hoi An Lantern Festival
14th Every Month (Lunar Calendar)
A monthly event that transforms the Hoi An town into a spectacular display of colorful lanterns. The town switches off all-electric lights and relies on the light coming from paper lanterns with candles floating hundreds of lanterns sparkling the river and its surroundings.
Travel
PREVIOUS
The Most Exciting Activities In Kampot
NEXT
Cambodia - The Best of Local Festivals 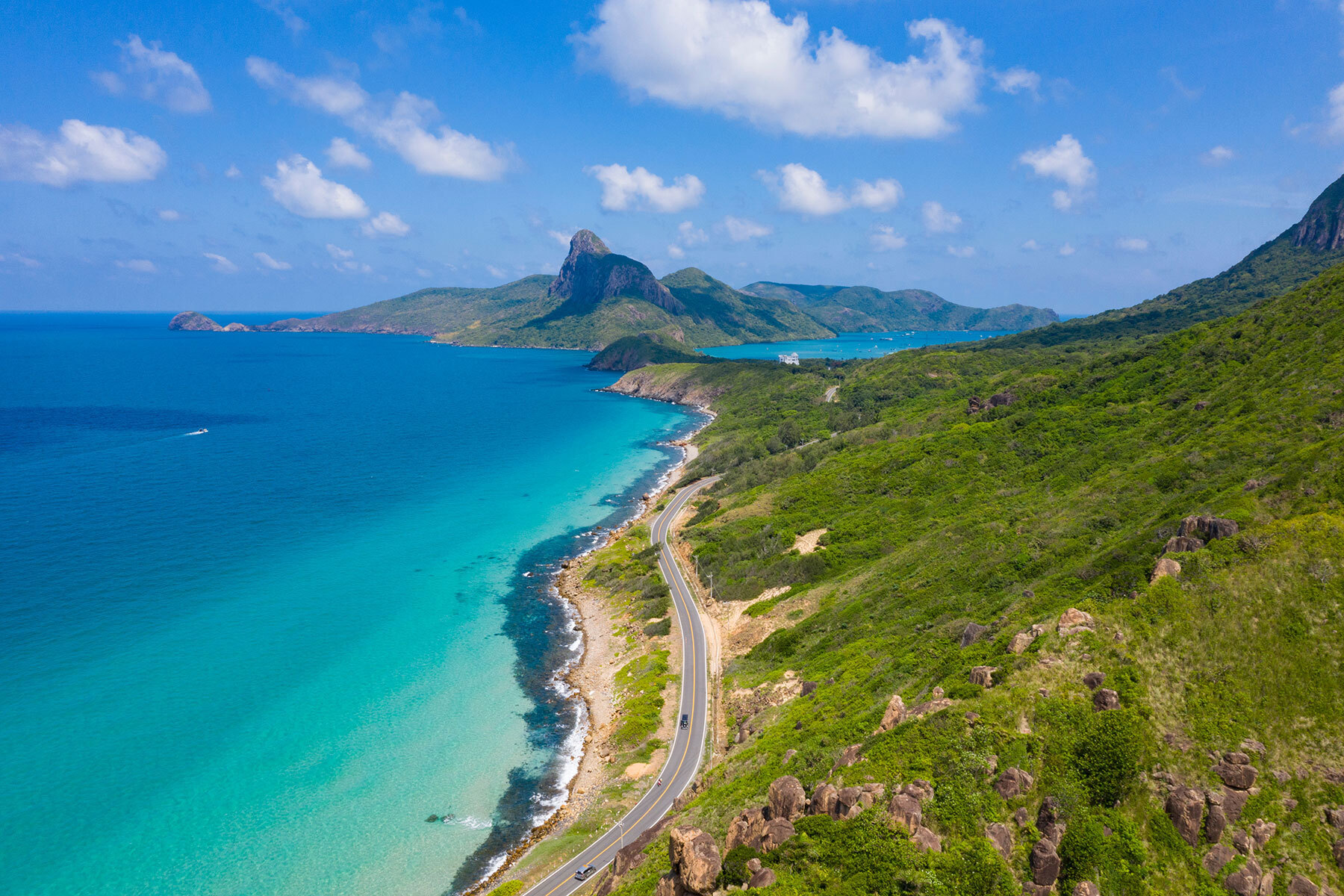 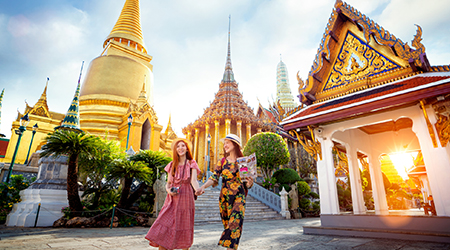 20 Million Tourists Are Expected To Visit Thailand In 2023, Bringing In 285 Billion In Revenue 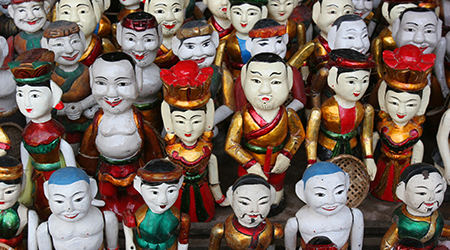 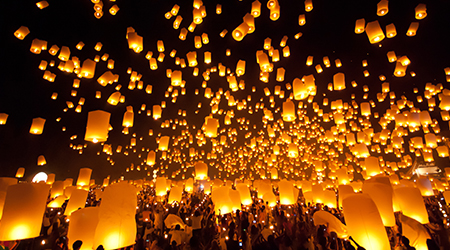